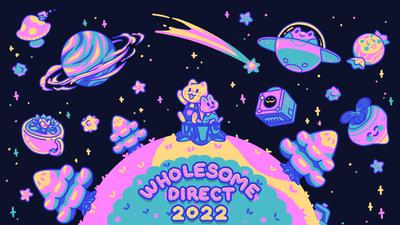 The 3rd Wholesome Direct has come and gone, and it was by far the biggest so far! Wholesome Games is a community started on Twitter in 2020, and their Wholesome Directs are independent, volunteer-run showcases highlighting indie games that are uplifting, thoughtful and compassionate. Opening with a time lapse of a watercolour painting to soft music, Wholesome Direct set the scene for the exact vibe it was going for. Hosted by Jenny Windom (@kimchica25), with Mary Kish (@merrykish) and Josh Boyk 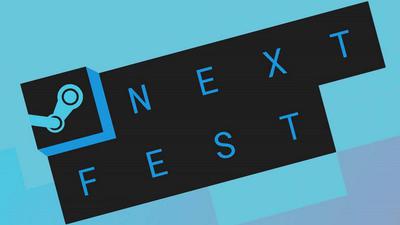 Steam Next Fest has come and gone, and we were gifted with so many demos from so many great games. For your convenience, and your Wishlist, I played a lot of them, and will be recommending my favourites! Farewell North is a game about restoring colour to the world. You play (mostly) as a collie, exploring the landscape. You reach glowing butterflies, and bring light to this duo-chromatic world. If an area seems inaccessible, you need to explore, as some elements of the world are missing and bro

Would You Search Through the Lonely Earth For Me? | Review

“Would You Search Through the Lonely Earth For Me?” is a one-player journaling role-playing game (RPG) written by Michael Whelan and Zoe Delahunty-Light. To the uninitiated, one-player journaling RPGs usually use a six-sided die or a deck of cards that act as writing prompts, according to a table, and leads you on an adventure that you can play entirely on your own.

This game discusses and/or contains material relating to the following Jessika is an FMV, or Full Motion Video, game by Tritrie Games, and published by Assemble Entertainment. You are an employee of White Flower, a company that uses their abilities as hackers to access encoded files to help give families closure on loved ones. You log into your laptop at a café, and the entire game takes place via the programs on said laptop. You are asked to look into the life of Jessika.

There Is No Game: Wrong Dimension | Review

Maid of Sker is a survival horror game set in the remote Welsh country side, at Sker Hotel. Developed and published by Welsh Interactive You are Thomas Evans, a composer, riding a train to Sker Hotel, after receiving a cryptic letter from your beloved, Elizabeth Williams. In it she provides you with her mother’s old music box, and requests you compose a counter melody to the song it plays. What does this all mean? Well, you’re about to find out. 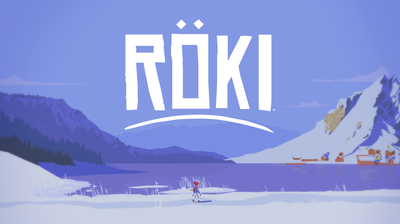 Röki is an adventure game developed by Polygon Treehouse, and published by United Label and CI Games. Inspired by Scandinavian folklore, there are puzzles abound in this beautiful adventure into a dark fairy tale. To say this game is charming, is an understatement. The art style alone is wonderous, whisking you away to a fantasy land filled with trolls, tomte and giants. You play as Tove, a young girl who has lost her mother long before the story begins, and who risks losing the rest of her fam 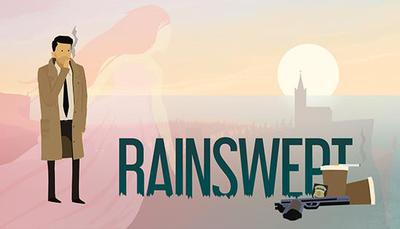 Welcome to Pineview, an idyllic town filled with kooky characters, and – oh yes, there’s been two bodies found dead. You are Michael Stone, a life-weary detective sent to Pineview, and who is hellbent on revealing the truth behind what happened to these people. All before the yearly festival celebrations begin. Developed and published by Frostwood Interactive and 2Awesome Partners, Rainswept was originally released for PC. Rainswept is now available on Switch, and it’s found a nice home 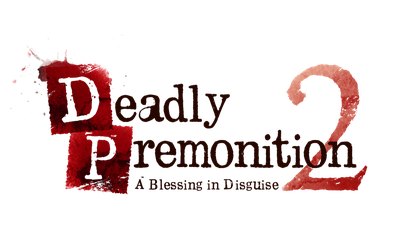 Hoo boy. Here we go. Deadly Premonition 2: A Blessing in Disguise, the sequel I can’t recall anyone asking for, is now available on Nintendo Switch, and I had the honor of playing it. I never played Deadly Premonition myself, but I’d seen it on many YouTube videos and had garnered the gist of it, so when offered Deadly Premonition 2 I had an idea of what I was in for. I love myself a so-bad-its-good movie, and I’ve played through every ending of Hatoful Boyfriend. I am no stranger to strange. 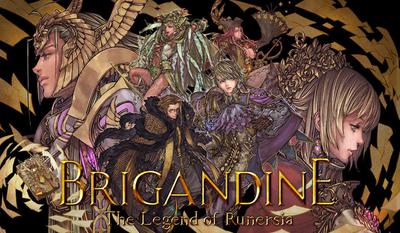 Brigandine: The Legend of Runersia | Review

Brigandine is back after 20 years in the shadows, in Brigandine: The Legend of Runersia. A tactical RPG developed by Matrix Software, published by Happinet for the Nintendo Switch. In Brigandine: The Legend of Runersia, you take control of one of six different nations, with your goal being to invade neighboring nations and take over their outposts until you rule all of Runersia. You organise your command of both heroes and monsters, leveling them up, sending them on quests for weapons, armor an 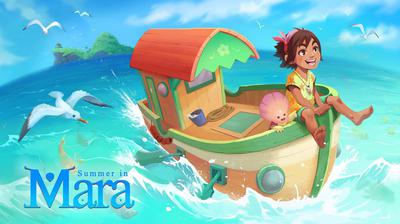 This summer comes the most ambitious project from Chibig, a small Spanish studio which previously made two mobile games – Tiny Planet and Ankora, and had made their way to consoles and PC with Deiland in 2018. But we’re not here to talk about them – we’re here to talk about Summer in Mara. The story behind Summer in Mara began in February 2019, when the project to fund it was launched on Kickstarter. I actually backed this project, pledging the lowest tier of €16, securing myself a digital copy. 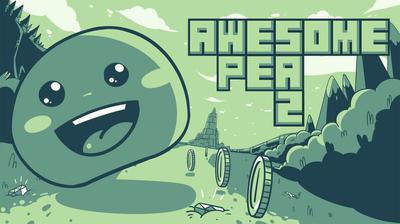 The pea is back! The sequel to PigeonDev’s 2018 platformer, Awesome Pea, is out, and despite not playing the original, I tried my hand at it. I didn’t know much about Awesome Pea 2 before going in. I read “platformer” and thought – hey, I like platformers, lets give it a bash. Like Mario! But I soon discovered that Awesome Pea is more akin to the sadistic levels of Mario Maker you see Youtubers play than Super Mario Bros. There is no story, there are no lives – its just you, a timer, and increa 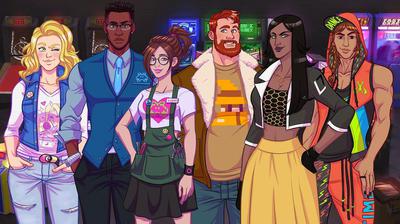 Arcade Spirits, developed by Fiction Factory Games and published by PQube Limited, released on Steam back in February 2019, is coming to consoles – Nintendo Switch, PS4, XBox One – on May 1st 2020, and not a moment too soon. Winner of the Melbourne Queer Games Festival ’19 Gold Medal Award, rocking near-perfect scores across multiple review outlets, this game has been sat on my Steam wishlist for a year. But now, Nintendo Switch in hand, I’ve finally been able to play through this game, and boy 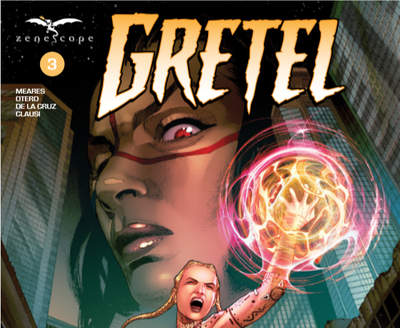 We’re at the midpoint in this five-issue series revolving around Gretel, of Hansel and Gretel fame, after her debut in Grimm Universe Presents. Gretel is traveling across America to reach her old nemesis, the wicked witch who once owned a house made of candy, who in this universe is named Vita. On her way, Gretel reflects on the past, including being a prisoner on a Nazi train in Poland. While her companion, Samuel, tracks down former ally Dae, whose creatures attacked both him and Gretel last i

We’re back in the land of Animosity, a world where sentience doesn’t just belong to humans but to every creature big and small. We return to the house of snakes we entered last issue. The camp of animals have now noticed the absence of Sandor and Jess, who are still in the depths of tripping on snake venom. We are not with the camp of animals for long this issue, the cliffhanger of last issue weighing on our minds. After a single page of painterly neutral colours, our eyes are bombarded with viv 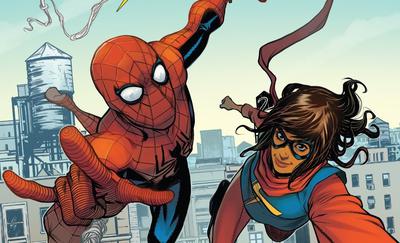 The Marvel Team Up series is back, and in this issue we find classic Peter Parker Spider-man teamed up with Ms Marvel, Kamala Khan. After an incident at a science conference at Empire State University, our mismatched heroes find that they have swapped bodies, and it is here that we find our duo. This isn’t the first time old pro Spider-man has been in this trope of a situation, but having only been around since 2014, coming in at 5 years compared to the half a century Spidey has under his spande

Originally created by R.L. Stine, spanning hundreds of books, a 4 season television show, and more recently two feature films starring Jack Black, Goosebumps was the 90s kid’s introduction to all thinks spooky. Since the early 2000’s the Goosebumps umbrella has opened up to include comic books also, and here we have the latest tale. Goosebumps: Horrors of the Witch House has the setup for a classic Goosebumps story – a small town, a young curious kid, and a mysterious stranger. When the old Wha 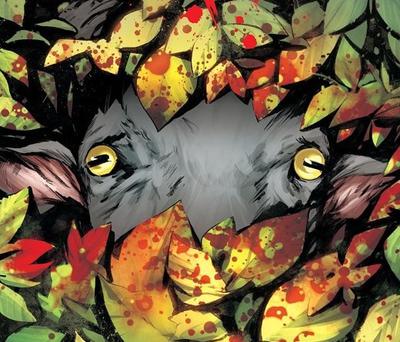 Animosity #20, written by Marguerite Bennett, art provided by Elton Thomasi, continues where #19 left off – our heroes Sandor and Jesse are following a rooster into the woods. This line can seem bizarre, but in a world where animals speak, and there is terror abound, when a rooster asks for your help, you follow. From the start we see a world of vivid colours, rich blues and purples, with the panels stretching across like roots, emphasising both the forest itself, and the feel of uncertainty fe 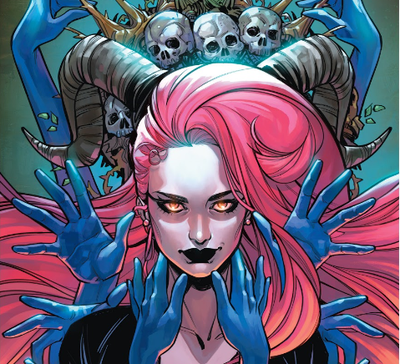 With Riverdale and The Chilling Adventures of Sabrina both being popular shows, Archie Comics are seeing as a resurgence of interest in their material, and Blossoms 666 is a worthwhile limited series to invest in. Described by writer Cullen Bunn (The Sixth Gun, Fear Itself: The Fearless) as “one part Omen, one part Cruel Intentions, all Archie!”, and he’s not wrong. Prior information about the Archie Comics characters is helpful, but not necessary, as this story works as a standalone piece. Cher 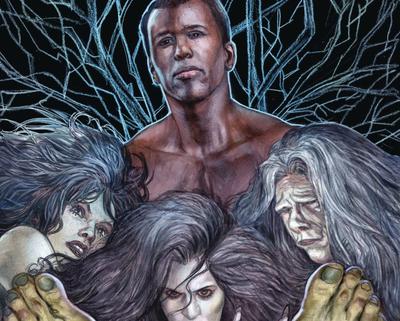 Review: American Gods: The Moment of the Storm #1 - Comic Crusaders

American Gods is a book by Neil Gaiman, originally written in 2001. In 2002, it won the Hugo Award for Best Novel, Locus Award for Best Fantasy Novel, and the Nebula Award for Best Novel. As well as the comic series by Dark Horse Comics, it has spawned a TV series on the Starz Network, which is currently on its second season. Merging Americana, fantasy, and mythological stories from across the world, American Gods is the story of Shadow, a man released from prison to find his world turned upside
Close ✕